Introduction to Surfing and Surfing Science

Ocean waves are formed by low-pressure storm systems far out at sea, or by localized onshore winds. Waves traveling from a long distance away are called ground swells , and travel across the ocean in orderly groups called sets . Sets of waves generally have between three and eight waves, but can have more, and can travel solo, though not often.

Ground swells for surfers are produced by large low pressure systems in cold latitudes, or by tropical storms and hurricanes, in both the southern and northern hemispheres. 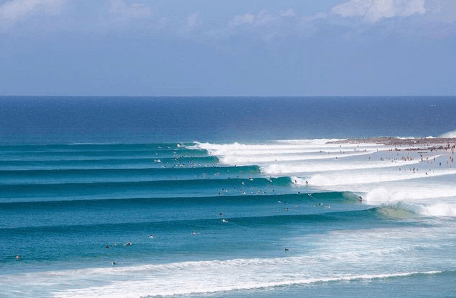 Wind swells , on the other hand, are created by strong localized on hore winds that create waves traveling in more tightly packed and less organized sets, this generally creates much choppier water.

How a wave will break depends on five factors:

To have good surf:

Waves can either be ” mushy” ; breaking slowly with a lip that just sort of crumbles over when the wave breaks, or ” hollow “; fast-breaking, barreling waves with lips that pitch out forcefully into the wave’s trough.

The types of waves that can be surfed are called beach breaks, pointbreaks, and reef breaks . These waves all have their own characteristics; 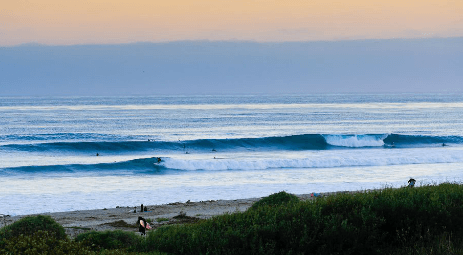 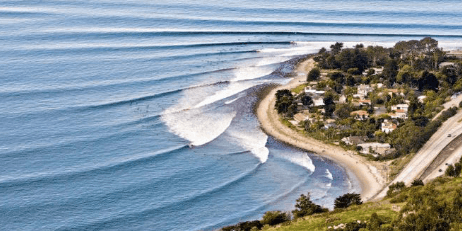 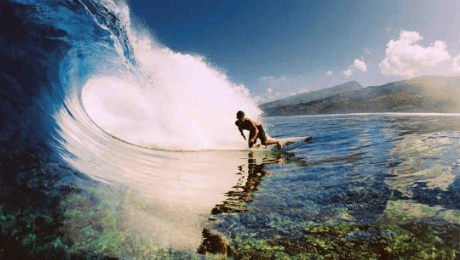 Every wave that ” peels ” (runs sideways down the beach for a distance before shutting down ) goes either left or right. The way to tell the difference between the two is simple; when you’re lying down on your surfboard, paddling into a wave, you’re going to drop into the wave and angle either towards your right (then it’s a right hander) or your left (which tells us it’s a left hander). Important, when seen from the beach, someone going left will be going towards your right.

Everyone has their preference as to which foot goes forward:

So, if you’re a regular foot, and you drop into a wave and go right, you’ll be going frontside: facing the wave. Drop into a left, and you’re going backside (back to the wave). For goofies, it’s left: frontside, and right: backside.

A strong, narrow surface current that flows rapidly away from the shore. Rip currents form when excess water that has accumulated along a shore due to wind and waves rushes back suddenly to deeper waters. Also called r iptide.

Most surfers, after time, will learn to paddle out right in the middle of rip currents, in order to get a “free ride” out to the break, and then surf right alongside the rips, as they tend to sweep the sandbars into desirable shapes. 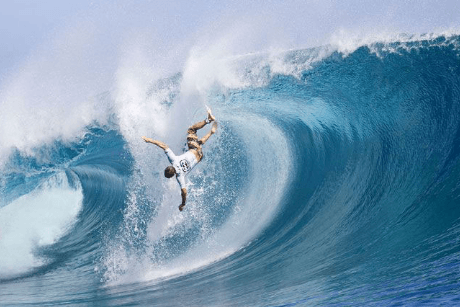 ALWAYS REMEMBER – If you do get hit by a wave and held underwater, never panic and scratch hard for the surface! Here’s something to consider: when big-wave surfers take a wipeout on a thirty or forty foot wave, like Waimea Bay in Hawaii, they’re almost never underwater for more than twenty seconds. A twenty second hold down would be considered an extremely long time by any experienced surfer. On waves that beginners are likely to ride, from around knee to head high, wipeouts are nothing to fear; even on a powerful wave, you’ll be underwater for no more than five to ten seconds. It is a natural reaction to panic and try as hard as you can to get up to the surface, and every second you’re underwater seems to feel like ten, but once you learn to relax, you’ll find that being tumbled around by a wave is not bad at all. It’s actually kind of fun; it just depends on how you look at it.

Don’t forget that your surfboard isn’t just for riding waves, it is also an excellent lifesaving device and your primary means of getting out of trouble should a bad situation arise.

The best thing you can do for both yourself and others in the water is simple – just enjoy yourself! It’s hard not to have a good time in the surf, but everyone has a bad day every once in awhile. If you find yourself getting frustrated, ask yourself why. Are you missing waves that you’re trying to catch, and wiping out on the ones you do manage to get into? Maybe someone has dropped in on you a few times, or hit you with their surfboard and didn’t apologize. Hey, don’t worry, be happy! Remember to always stay in a relaxed frame of mind, and encourage others to do the same. Share waves, smile, and give a kind word to both friends and strangers alike. Hoot for others when you see them get a good wave, and soon you’ll hear other surfers hooting for you on your good ones! 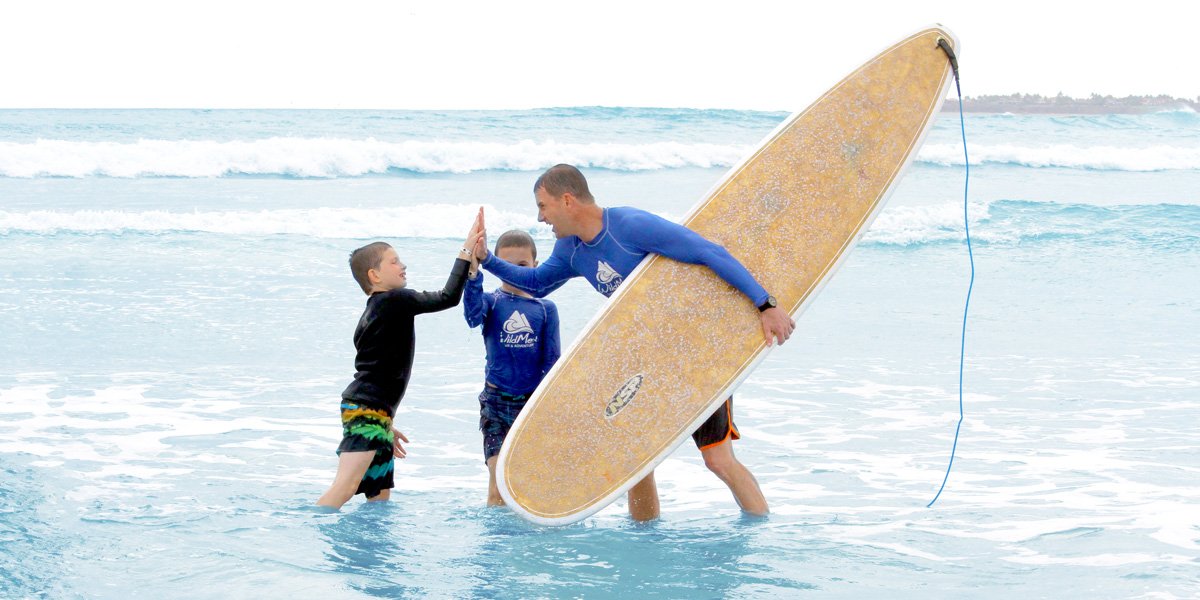 Catch your first wave at La Lancha! With local and certified instructors to make your experience unforgettable. Enjoy your Surf Lesson in crystal clear water or just hang out on the beach.

Our Surf Lessons in Punta Mita (La Lancha) begin a

How to stand up on a surfboard? We show you how!